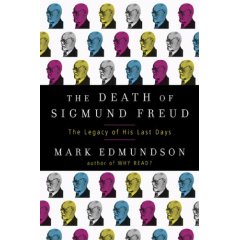 The Death of Sigmund Freud: the Legacy of his Last Days by Mark Edmundson